Coming out of hibernation

I was planning on just taking a few weeks off, maybe even a month after my last race in December 15th. I had gotten sick on Christmas and it lasted through the new year.

January 13th & 15th I got out there and ran. The next week I followed that up too. Then I stopped. I had gotten sick again and started a new show. 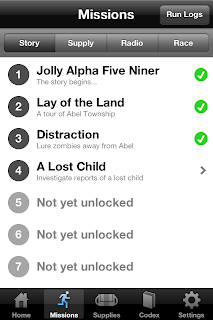 From January to February I've run a total of 14 miles. Most of those are due to using the Run, Zombies! App.

I'm on mission 6 now. While I enjoy it so much more when I can run with this outside, it does make the time pass quickly on the treadmill.

I had a friend email me and ask if I would be blogging again. It was nice to know someone liked reading my stuff. It was even nicer to have some external motivation to start up my running season in a serious manner.

Still, I would like some intrinsic motivation. I know I won't be joining USAfit this year and I'm unsure what my half marathon training will actually look like. I'm unsure of a lot of things truthfully.

I signed up for the Rabbit Ramble 4mile race at the end of this month. My official training starts next week, although I've been running 2 miles at least twice a week the past week or so.

I feel like I've put on a lot of weight lately. I don't know how much damage I've done. Running used to help me with anger but it never has really helped with the sadness. It helped keep the sadness at bay when I ran all the time but getting out of this slump, of not emotionally hurting in the downtime. That's the hard part.

It is hard to say that I don't care but that is all I want to say lately and I have to fight that. Fighting that and the pavement at the same time, well it's a challenge I have to fight through and I just want to hibernate.
Posted by Hollie L. Miller at 2:03 PM

Email ThisBlogThis!Share to TwitterShare to FacebookShare to Pinterest
Labels: heart and head, time off, training