My first half marathon

I had laid out and packed all of my stuff for the race the night before. Jenika was picking me up at 7am the next morning to bring me to the start line. I had gotten up, checked email and checked Facebook. I got the nicest and most unexpected Facebook message from Keri F., it made me smile and started my day off well.

Everything I did yesterday was as by the book from my training as it could be. 20oz of water upon awaking. Almond butter on my pumpkin spice waffles. Vaseline all over my feet. I got ready and bit by bit it started to shape together. I put my orange bandana on and looked at myself in the mirror and said "this is what a half marathoner looks like."

I waited for Jenika to pick me up out on the street. I had in showtunes on my little ipod so I could try and have my nerves calm down. We parked at the start line and as crossing the street I hear Mary Wit. shout from her car hello at me. It was chilly out, which was great for the race but sucked for the waiting around. For a bit it was just Jenika and I waiting around. All around us "running gangs" started to form. So many runners know each other and it was more than evident as the day went along. Soon, Colleen, Mary W, Nooch, and Kim (Mrs. Nooch) found their way to us and our own little running gang was formed. Ed and Kate and Kate's parents were all around too. (I'm waiting for the official running gang photo to come so I can put it on my work desk)

They were all really good about my hugging rule, they let me come in for the hugs. It was a hug-a-palooza.

I couldn't help but compare emotions to the half starting line to the boilermaker starting line. it's really different. The half, while longer and harder for different reasons was full of nerves. The boilermaker, is still nerves but it's more logistics that I'm always worried about.

It was eerie quiet during the Star Spangled Banner and we walked up to the start, almost all of us pressing our watches, and then started off running. I had a plan. Break the race down into 4 mile long races. Officially, I didn't have a time goal. Unofficially, I knew what I wanted to beat was at least 3:30:00. I started out with my fleece on since Jenika said she'd be a few miles down to grab things from everyone. I told myself I HAD to stick to my intervals. HAD TO. I did for the most part, there was never a time where I walked both intervals, but there were a few times when I ran 7:30 instead of 3 mins run, 1:30 walk, 3 mins run.

Once I got onto the actual bike path, I knew I'd be a lot better. I remember the tunnels would be there, I could think back to the training day we ran the first 2 miles on the start of the half route. There were these two ladies who were in front of me. I knew that I would collect those "kills". I had just passed them as I came up upon the spot where Jenika was hanging out. She started to cheer spell my name. Quite embarrassing but quite lovely at the same time. I handed off my fleece and then quickly stated I wanted to stay in front of these two ladies because they would not shut up on the course.I kept running and was approaching the last tunnel. There was this car over the top of it that was honking. Then I saw that damn orange cap from out the window and I just laughed and waved and kept running.

My intervals made it really close for the chatty ladies to catch back up to me. The one woman (the pregnant one) asking if I went to Mount Holyoke. I assured her I didn't. Then she stated they were just going to follow my lead, that I would be their pacer. I didn't say anything because I was saved by a run interval. They were looking for a porta potty. I knew there was one coming soon. We were out of the first 4 miles and I saw one, on the side of the road, at the beginning of the city 4 miles. It was all downhill, I knew they would stop, I knew it was my chance to screw the intervals and keep running to put some distance between us. The volunteers at this stop were having a competition on who was going to give away more things. I remember the one girl saying "but it would make me feel better" - it was just really poor logic on her part. At the bottom of the hill I had my first surprise. My mom, dad, brother and Krystal were at the bottom of the hill. My dad put a water bottle in my pack for me and I kept running. 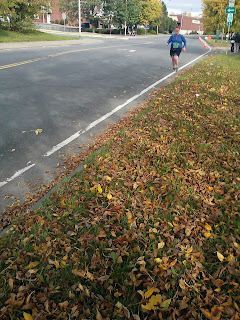 Before the race, while looking at the route, I thought the 4 miles on the city roads were going to be the most difficult for me. It was the reverse, it was my favorite part of the race really. Kathy & James were on the side of the road and I picked up a gatorade from them. The traffic and the intersection were an odd and interesting challenge. One car blew right past a cop telling them to stop, it was great when he was turning my direction. Another guy at a gas station played the I can pull out faster than you can run game with me. But at 6.5 miles the volunteer holding traffic said, you are half way finished. I shouted "IS THIS 6.5 MILES?" and she said "YEAH"

The whole time I knew that I would need to keep a 16:01 average pace in order to finish before 3:30. At each mile my runkeeper went off telling me my pace & total time. I was astonished when I hit mile seven. I was doing really well with my pace. A few nights before the race I looked at my old 12 mile training run. My splits were all over the place. So I knew I needed to keep up the pace the entire race. Joel had sent me a nice note over email that said, "if you reach the point where you just want to walk, say fuck that and keep your arms pumping."So I just kept doing that. I didn't think about my feet, I just thought about my arms.

I saw my family once again at the 7 or 7.5 mark and when my brother said "you're halfway there!" I shouted back "MORE than HALF!" Mile 8 started back into the bike path and the Kinderhook Running Club housed the water station just prior, they were great sports. Mile 8 to 9 was just pretty, I really think it's the only time on the course that I actually looked around. Just prior to hitting the 8 mile mark, the motorcycle leading the first marathon leader passed me. The rest of the race it was just a lot of men passing me, then a few ladies, then I lost count.

Miles 9.5 to 11 were hard.  I was passed by power walkers, who didn't know to get out of the way for marathoners and stayed two abreast the entire time. I knew I'd see USAFit coach Jennie at the Team in Training water stop which was around mile 11, I think. I heard Cheryl shout out first and then I couldn't help but smile. Dude with the wig and mickey mouse hands, thank you for the high five.

Jennie, Cheryl and Jeff all gave me big high fives and shouted me through the water stop. It was awesome, and just what I needed at that moment. All of the signs at the water stop started to make me cry. It made me think about the organization itself and what they do and they people they do it for. It also made me think of Team in Training Brooklyn, so Rachel & Joel - you were there in spirit with me!

It was all about the arm pumping to get to mile twelve. My achilles was killing me, there was a bit of tension right at the back of my right heel. Mile twelve to thirteen was a dedicated mile for me. I planned on only having one mile be dedicated. Both Joel and Jenika helped talk me through a lot of hard things during my half marathon training. A lot of technical things and a lot of personal things. When I got to mile marker 12, I knew the next mile was for both of them.


During that mile, I ran into Jula. There was a sweet pink kids bmx bike next to her and I asked her if it was her ride. She walked besides me and sang the Rocky theme song. I was getting closer to the finish line. I HEARD COWBELLS! I saw Mary Wit. and Kerry shouting for me. I was all big smiles.

At this point in the half you are like "ok, where the hell is the finish line?" You know it's close but you can't see it. I had people all around shouting out "Looking good 2601" (All I could hear was 24601 and think am I Jean Valjean?)


The finish shute is lined with spectators. I focused on the finish and then all of a sudden, I see a person step out. It's a white fleece and an ORANGE HAT! Then I was like, who the hell just stepped in front of Jenika, then in my head I was like that's Kathleen & Nik! I saw Carla and Chad, and Kathy, James, & Collette and my family. They all stepped back and I just ran straight at Jenika. She was taking pictures. I asked her as I passed "Where the hell is the finish line?' and she just pointed. The clock said something around 2:23:30. I was freaking out. The announcer said my name and I put both my hands in the air. I finished and I blew my goal time away.

I got my superhero cape a.k.a emergency space blanket and the woman placed my medal around my neck saying congratulations Hollie. It was at this point that I literally didn't know what the hell to do next. I hoped people would come and find me because I literally could not think for myself. Jula handed me a water, Jenika gave me my coat and I reapplied the space blanket. I saw Marey at the results table and she gave me a big ol hug and was so excited for me.

Everyone did find me and I gave hugs all around. I kept looking at Jenika saying, I don't know what I am supposed to do. After I said all my goodbyes to friends and family, we made the walk back to the car. I wanted to walk because I didn't want my legs to be super stiff, as I knew I had stairs to conquer back at my apartment.